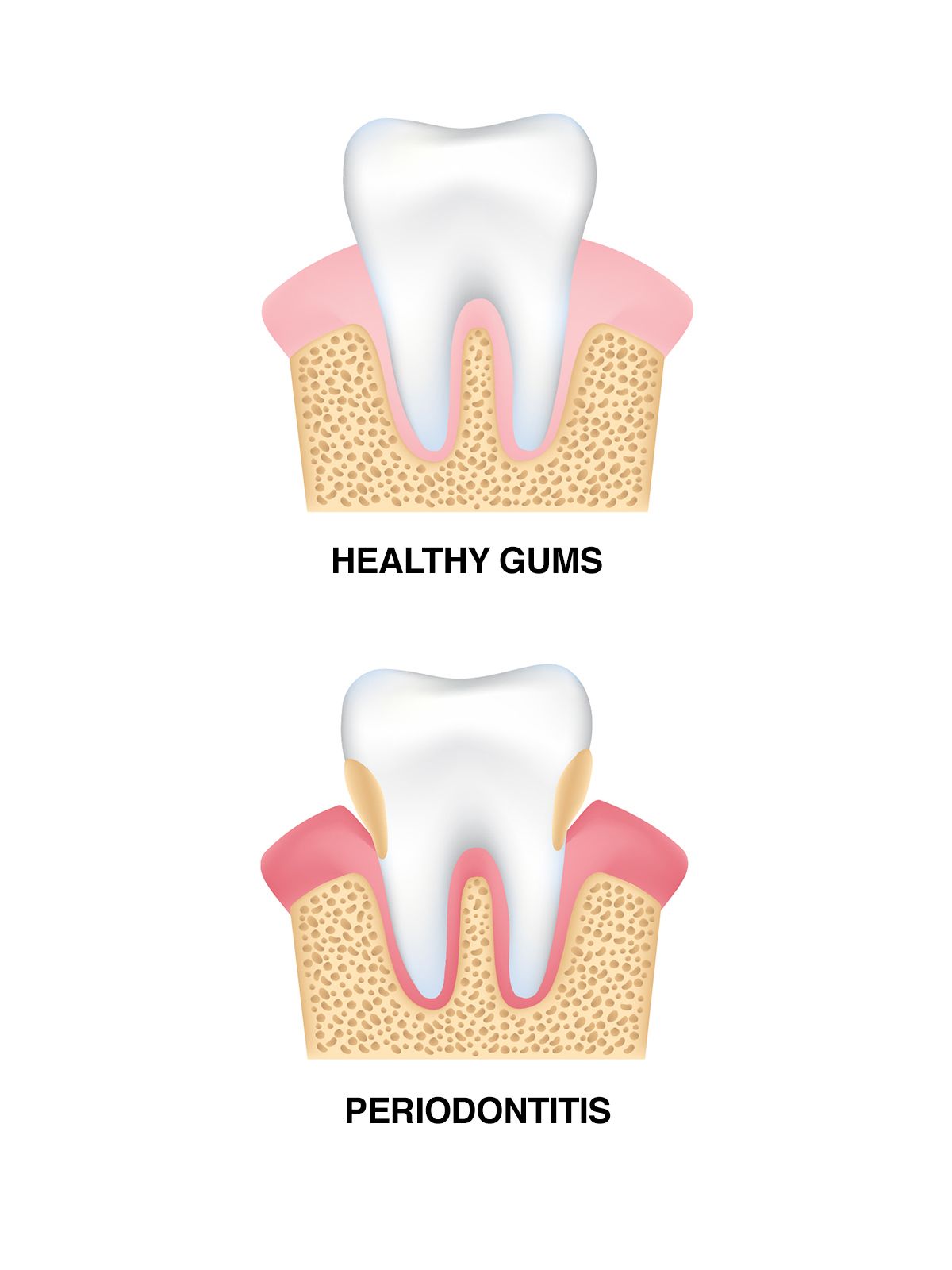 Dentists sometimes have the unenviable task of informing their patients that they have "infected pockets" in their gum, otherwise known as periodontal pockets. Most patients are puzzled by this statement and they need more information.

To understand the significance of a periodontal pocket, patients should know how it is formed, how it can be detected, how and why it needs to be treated, and most importantly, whether it can be cured. All are legitimate questions that deserve serious answers.

Between the tooth and gum is a narrow crevice called a gingival sulcus. It extends 360 degrees around each tooth. At the bottom of the sulcus, the gum attaches to the tooth. In healthy gums, the sulcus is very shallow—less than three millimeters in depth. When the depth of this sulcus increases, it is said to result from "attachment loss" and is no longer considered a healthy sulcus but rather an infected periodontal pocket.

The progression from a sulcus to a pocket begins with the formation of a sticky, clear, bacteria-laden substance called bacterial plaque. This starts to form on teeth within hours after brushing and flossing. If the patient allows even a small amount of the plaque to remain in place, the toxins given off by the bacteria irritate the gum tissue surrounding the sulcus and cause an inflammatory response called gingivitis. It is characterized by redness and puffiness. Those with gingivitis may also bleed when they brush and floss. Gingivitis is considered nondestructive, and it can be reversed with a professional hygienic cleaning.

However, if the plaque continues to remain in place, it begins to creep deeper into the gingival sulcus, where the bacterial population becomes more virulent. In time this subgingival plaque calcifies and forms a hard substance known as calculus. The bacterial toxins from the calculus continue to irritate the surrounding tissues, causing the base of the sulcus to become further inflamed. This in turn causes additional attachment loss, and the sulcus becomes deeper.

All periodontal pockets should be treated as soon as possible. If not, they are likely to progress in depth and become difficult or impossible to treat.

At this point, gingivitis has progressed to periodontitis. If the process continues, bone loss will ensue, and the tooth itself will eventually be in jeopardy.

Periodontal pockets are generally asymptomatic, but dentists and periodontists—i.e. dentists who specialize in diseases of the gums—can easily detect them by using a periodontal probe. The tip of this instrument is gently inserted into the sulcus or pocket, and the depth can then be read from the calibrated marks on the probe's tip. When the depth exceeds three millimeters, it is considered a pocket.

The exception is in the case of a so-called "pseudo-pocket." This is an otherwise healthy sulcus that is greater than three millimeters, only because of excess gingival tissue and not because of any attachment loss. Pseudo-pockets do not require special treatment but should be closely monitored since cleaning them can be difficult, and they can easily progress to a true pocket.

All periodontal pockets should be treated as soon as possible. If not, they are likely to become deeper and more difficult if not impossible to treat. General dentists can sometimes provide treatment, but patients are usually referred to the periodontist for more complicated procedures.

Shallow periodontal pockets of three to five millimeters are usually treated non-surgically with a procedure known as scaling and root planing, or deep cleaning. This is usually performed by the dentist or dental hygienist, using local anesthesia. 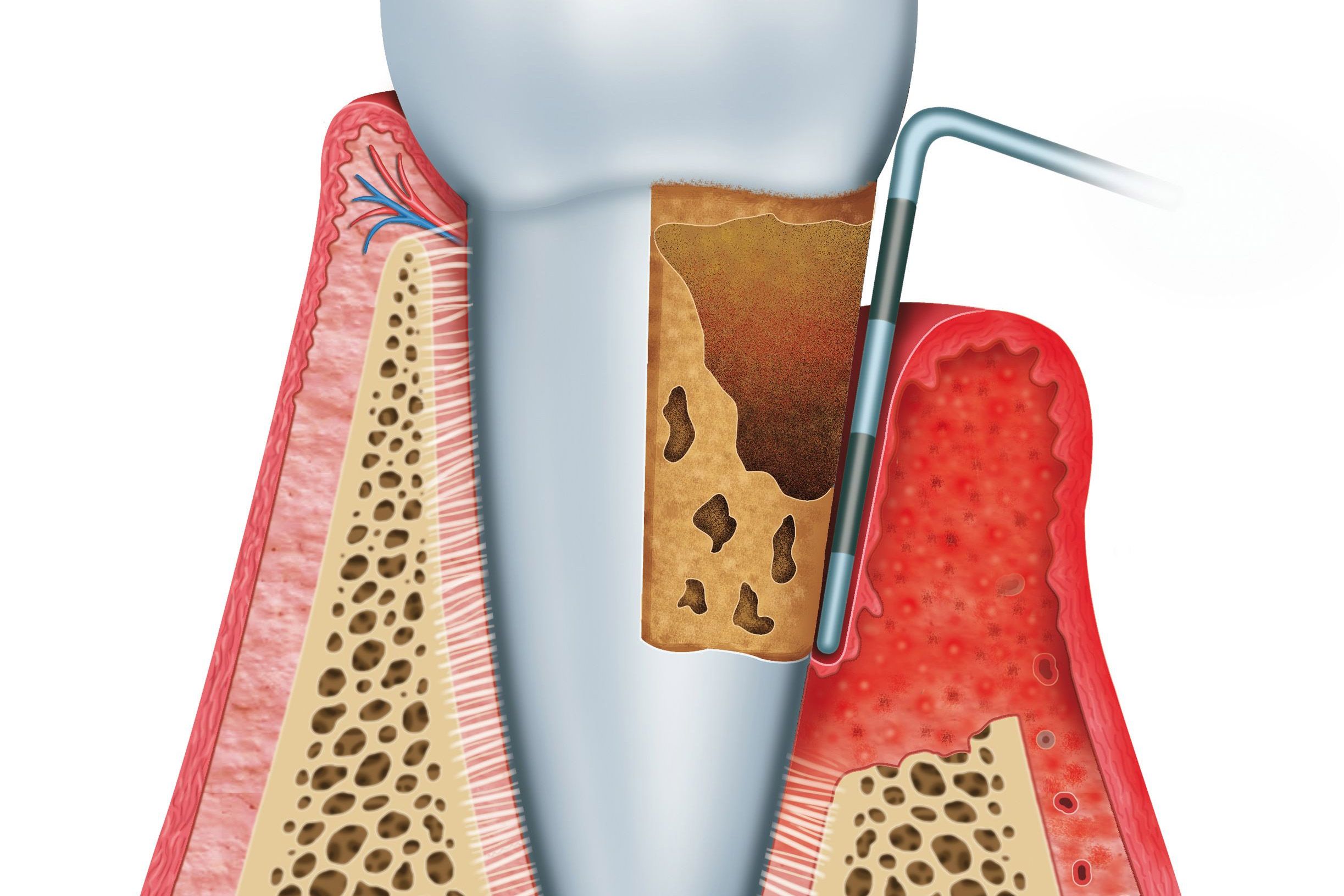 During treatment, a scaler is used to scrape the tooth surface and remove calculus and toxins. The attachment loss and pocket depth can improve slightly after this treatment but will generally not return to complete health. However, this treatment will eliminate the source of inflammation, and with scrupulous oral hygiene and frequent professional cleanings, the health of the tooth or teeth can be maintained.

Some doctors also use laser technology during treatment, which can eliminate bacteria and cauterize the gum tissue simultaneously. Lasers can target unhealthy tissue without affecting the surrounding area.

For deeper pockets of six millimeters and upward, scaling and root planing is also necessary. However, periodontal surgery may be required in conjunction to gain access to the tooth surface buried deep down in the pocket. Additionally, bony defects created by the disease may be surgically eliminated. Sometimes, grafting materials are placed during surgery to encourage new bone growth.

Once treatment is complete, regardless of whether it is surgical or non-surgical, periodontal patients are almost always placed on an indefinite management program with either their dentist or periodontist. They will be appointed for appointments as often as every three months so that they can be closely monitored for recurrence of the disease. The appointment typically consists of an exam, a dental cleaning, and an evaluation of the patient's oral hygiene.

In most cases, periodontal pockets can be prevented by effective and regular brushing and flossing, starting at a young age. Those patients who, despite their best efforts, notice redness, puffiness, or bleeding from their gums while brushing should see their dentist or dental hygienist for further evaluation.

Having infected pockets is not good news, but if detected early enough, they can be successfully treated. Contact your dentist today if you are struggling with bleeding gums, tenderness, or swelling. 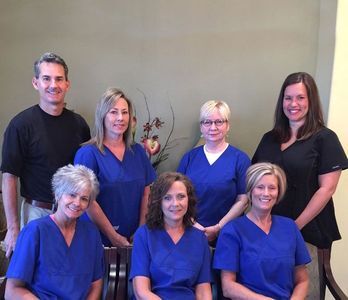 Dr. Shannon P. Patterson and the team at Brookhaven Dental Center provide high-quality, compassionate care so that patients in Auburn, Lincoln County, and surrounding areas can enjoy brilliant smiles for a lifetime. We are affiliated with several organizations, including:

To learn more about our services or schedule a consultation, call us at (601) 833-0746 or request an appointment online.

*Disclaimer: results are not guaranteed, may not be permanent, and can vary per individual. Some images are of models, not actual patients.